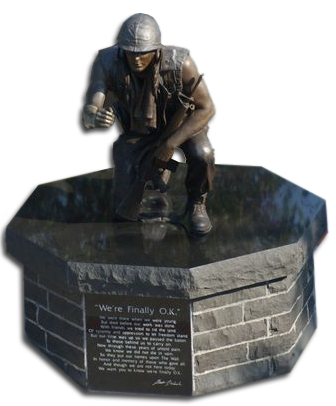 In 1997, Vietnam Veteran Roger Roe had a dream.  A dream of a memorial dedicated to all howard County Veterans.  His dream became a reality in 1998 with the help of his friends from UAW Local 292.  In partnership with local government and business leaders the Howard County Veterans Memorial Corporation (HCVMC) was formed in 1999.

The HCVMC traveled to Pottstown, Pennsylvania to look at the veteran’s memorial there.  Inspired by what they saw, the Committee worked with Miami county’s master model maker Jerry Linquist to create a mockup of the proposed Howard County Memorial.

Drawing the Kokomo Parks Department into the endeavor, Darough Chapel park was chosen as the site for the new monument.  Funds for the memorial were generated by sending out flyers to the community and selling t-shirts, jackets and bricks; the memorial was completed on September 17, 2000.

On May 28, 2007, the HCVMC board of Directors dedicated a new addition to the memorial in honor of the brave young men from Howard County who lost their lives helping to fight the Global War on Terror.

Phase III of the memorial, Allegiance Rock, was dedicated on May 26, 2008.  The rock and new walkway called POW/MIA walk was created by graphic designer Chad McCarter.     Many thanks go out to our elected officials, veterans and citizens from every walk of life for their dedication, contributions and never ending support in order to make this monument a reality.

The board of Directors of the Howard County Veterans Memorial Corporation are now and forever the gatekeepers and caretakers of the memorial, honoring and preserving the memories of all the men and women who served this community and our great country.